Work In Progress: Meditation in Motion

The father of Modern Electricity, Nikola Tesla was not just that.  A century later the world is embracing this genius and what he understood is the very basis of the universe, “Vibration”.
Interesting to note, this unique minds relation with Vedic knowledge and his close interaction with none other than Swami Vivekananda. It is after meeting Swamiji, that Tesla began using terms like “Akasha” and the concept of luminiferous ether to describe the source, existence and construction of matter. Tesla’s use of Vedic terminology provides a key to understanding his scientific views of electromagnetism and the nature of the universe. Thanks to Tesla today scientists world over accept the universe is made up of energy. To know more about Tesla and his fantastic revelations all you have to google is this series of numbers 3,6,9.
My reason to name the said display of work this year 3,6,9 was not a random choice. I recognise that I am also responding to the vibrations in and around me. My current vibrations had me think and re think about these universal mathematical patterns. Patterns which are pr- historic and are found in all pre-historic art, and in different parts of the world, from different cultures and spaces and dating way back to any formal way of religion. Yes, I am talking of the patterns we very often find embed in nature. Be it the Fibonacci sequence of the spiral, or the formation of a Yantra.
A Yantra is the yogic machine of a visual instrument that serves in meditation. It is the microcosm of the universe and hence it is the body while Mantra in the mind. Through sound vibration experiments, scientist have seen the formation of these Yantras. Atoms and Molecules reverberate to these sounds and create certain shapes. The universe has left its blueprint through the shapes it surrounds us in nature and through the vibrations it engulfs us with. With the daily chaos of material life, we have drowned these sounds and vibrations.


Recently I found myself very intrigued to the mathematical, geometric patterns. Intrigued by the Yantra world we inhabit, I started doing my own research and I am still working on it and while I do so many other revelations keep coming my way. I have also been deeply interested in the Kali Yantra as a concept. The term Kali comes from the word Kaala. She is the female consort or the embodiment of all the Shiva stands for, the universal model of change. Humans by nature are averse to change and hence fear it. It’s this concept of fear that over centuries gave her a physical fiery form and various iconography and mythological references along with it. However, Kali is first and foremost a concept. She is best visualized in the form of a Yantra, as change and the universe’s model of change should be an abstraction of sorts. Its nature should be defined and hence should have the clear angles and edges of a geometric pattern. As religions took shape and form so did the concept and hence she became a female with dark powers of Tantra and all kind of symbolism attached to her physical embodiment as Kali. While I do not negate the cultural belief of this form and the gathering of communities to celebrate the female prowess, I find myself inclining more to a shape I find easy to meditate with. Hence it has been very satisfying to find her in various geometric patterns, through various tools and techniques. Through my limited sensibilities, I have tried to meditate upon the formless one through, the formations my mind creates. It’s a journey I began and it shall continue for I remain a work in progress. Meditation in Motion continues….3, 6, 9…… 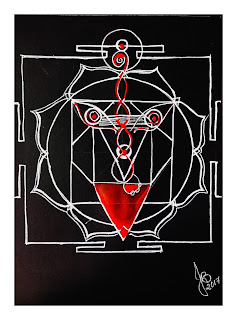 A subject so so close to my heart . Such a wonderful piece of research. Would love to discuss and hear more