The Face That Talks Back 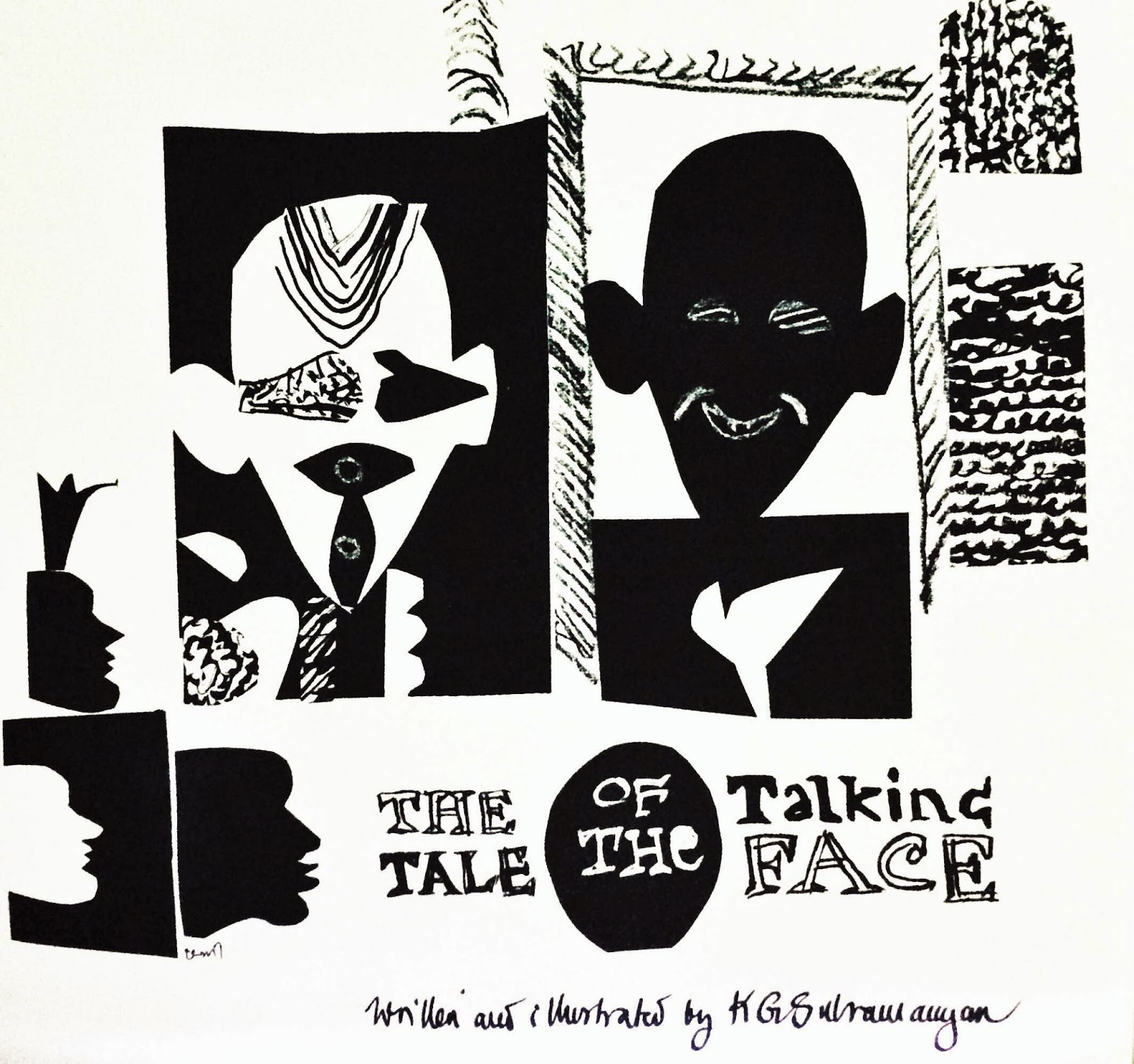 Recently while in India, we were driving from Pondicherry back to Chennai, we spent an afternoon at Dakshin Chitra. It was a nice cultural treat for us. The highlight however was catching an exhibition on “The Tale of the Talking Face” the book Illustrated and narrated by the great K. G. Subramanyam. An illustrated story, probing deep into a democracy gone all wrong and totally webbed in satire, this book makes you sit up and wonder at the genius behind those lines, whether etched or written.
K. G. Subramanyam was born in Kerala in 1924, and in his youth he was actively involved in the Gandhian ideology and movement. He was always interested in art, but during the freedom struggle he was imprisoned and later banned from the govt colleges during the British Raj. Art was his calling and he went and realised this dream in Vishwabharati jumping straight from the Gandhian principles to the philosophy and understanding of Rabindranath Tagore. Under the tutelage like artists & art stalwarts like Nandalal Bose, Benod Behari Mukherjee and Ramkinkar Baij, he completed his art education by 1948. In 1951 he moved onto teach at Baroda at the Faculty of Fine Arts in M.S. University in Baroda. In between being an academic, in the arts he did some learning in London and a stint at Rock Fellar, U.S. He came back to Vishwabharati this time to teach in the year, in 1980 and he continued till, 1989 when he retired. At 89 and still an active contemporary artist he has had a versatile career spanning in painting, murals, various craft traditions of India, toy-making, pottery, illustration & design, terracotta and  sculpture. His paintings are noted for their inherent wit, ironies, satire and critical social commentaries. 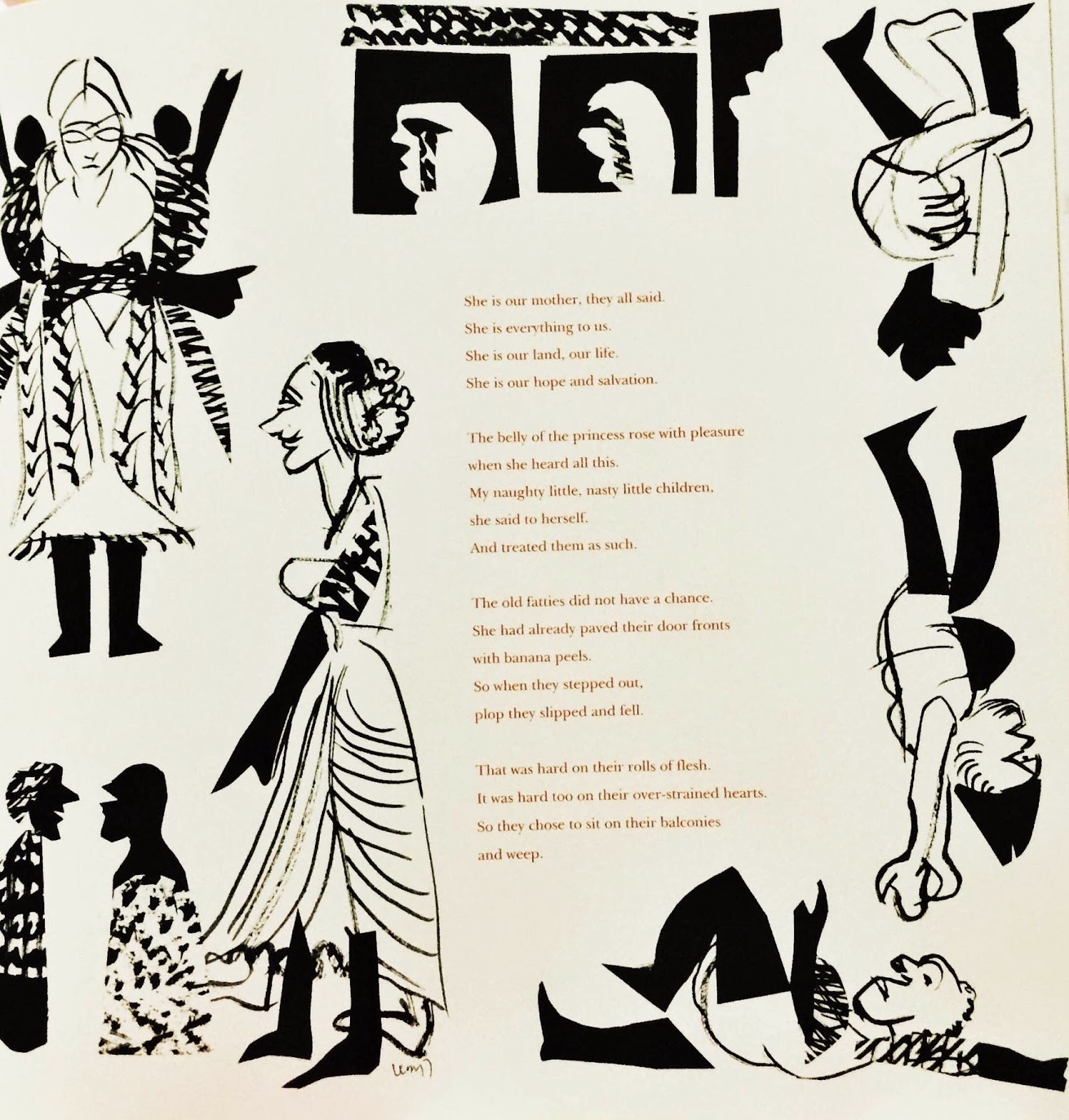 The best example of his satire and wit, one can find in The “Tale of the Talking Face”. An entire democratic regime it takes on, with illustrations and ruthless, truthful black humour, it cuts the illusion one had, of the longest “democratic regime”. It analyzes the psychology of a young girl trying to fit into her father’s big shoes. Caught between cruel shrewd politicians, who push her into a role, she was not ready for. Compelled to be something she was not cut out for she had to become ruthless to control them. What ensues is the growth the illusion of “doing good” and the “green” washing of eyes that chose to wear green glasses, which she “generously” distributes. Be it the slicing of the touting the “third world syndrome” or the useless “five year plans” or the eye wash of “festivals” these lines just force you to sit up and read through the psyche of this young princess and her ego gone all wrong.
“You planned things in the first year
You fanned your hopes in the next
You discussed them in the third
You detailed them in the fourth
Then canned the whole thing in the fifth”.
Its lines like these and many more that present to us, the not so silent oppressed observer of an artist’s mind, who is the ultimate recorder and also a decoder of his times. On a more personal note I was hugely attracted to this book as a political observer and a sceptic of the entire myth of democracy. Also the illustrations and the strong use of black, white and red probably just caught my attention more so. (I have hugely been stuck in a phase of painting and etching in these colour's for the past two years). 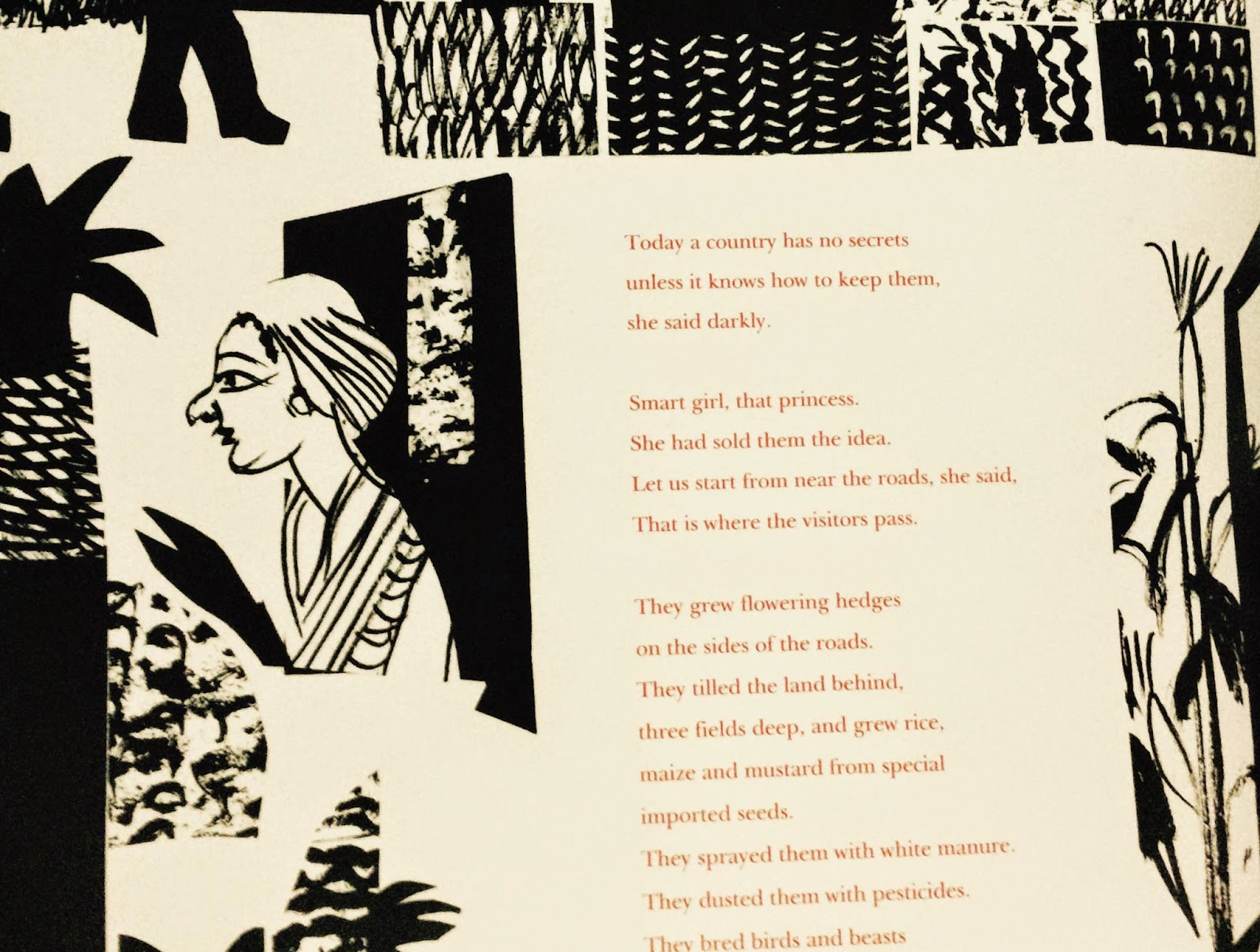 The bold lines speak of the courage of an uninhibited mind. While I have not had the opportunity to meet this amazing “mind” I have got a glimpse through this book. Treat yourself to this amazing book by clicking on the links below and getting yourself a copy. Meanwhile I shall once again go back and remove the cloth that draped on the “talking face”.

Posted by Joyotee at 7:53 AM No comments: