Journeys begin unannounced and so did mine with Ganesha as my vehicle of expression. Prior to 2001 I did smaller work and mostly etchings. Was raised with Bapi always teaching us even without aware that we were constantly learning from him whether he was painting for leisure or drawing up a plan for a forth coming, set to be put up. Our home was full of art and its happenings sometimes through practical sessions and a lot more through discussions. In 1991 that came to end after he passed on. There was an urgent need to connect to him although he was gone. I remember pulling down his books and doing a lot of still life paintings at this time. In 1996 I got married and moved to Singapore. I was told to rest for a year before I started on work of any sort. I did not mind it and with a non-stop education for 23 years of my life it felt like a well deserved break. My sweet husband, one day while returning from work got me the most humble form of art supplies. I did not have the heart to tell him due to Bapi’s supplies, I had never used such cheap art material even for my school work. He gradually realised that. In 2001 I was in Oregon, U.S. and suddenly found myself with endless material which he now bought for me and loads of time too. I started doing canvas after canvas.


“Why Ganesha?” you may ask. Simply because, I was enthused enough, to do Ganesha’s. I can’t even remember why. When I came back to Singapore I started selling a lot of Ganesha’s and loads of them commissions for various people. It seemed to have a favour with most Indians. I started looking at various paintings of Hussain’s and started using his Ganesha’s as inspiration. Gajanan Dandekar, with whom I did do a workshop when I went to Mumbai, is also a follower of Hussains’ style. While I explored the feminine form and steadfastly developed my own style I continued my study of Lambodara.


In Indian modern art one finds that since the mid 1900’s lot of artists would have indulged at least once in their career on this God. Is it because it’s so hugely woven in our psyches through various myths and stories that revolve around this cute child like figure. Does he seem more approachable because of his divine innocence? I will just throw light on some of these through my exploration. The sacred texts give a variety of stories narrating the sequence of Ganesha's birth. The most popular being the one mentioning that Ganesha was created by Goddess Parvati as a guardian to her privacy. We all know how she created him from the sandalwood paste she rubbed of her body. She called him her son and asked him to guard her door and soon enough Shiva came and was obstructed entry into his own abode by this boy who claimed to be Uma’s son. We know how the Lord and his rage resulted in the boy having an elephant head. To bestow respect on her son who now had an elephant head Shiva named him “Ganesha”, the word Ganesha is made up of gana (followers of Shiva) and isha (lord), thus Shiva appointed him the lord of his ganas.


One finds a lot of symbolism attached to each physical attribute of this Deity. According to the strict rules of Hindu iconography, Ganesha figures with only two hands are a taboo. Hence, Ganesha figures are most commonly seen with four hands which signify their divinity. Some figures may be seen with six, some with eight, some with ten, some with twelve and some with fourteen hands, each hand carrying a symbol which differs from the symbols in other hands, there being about fifty seven symbols in all, according to the findings of research scholars. The principal scriptures dedicated to Ganesha are the Ganesha Purana, the Mudgala Purana, and the Ganapati Atharvashirsa. 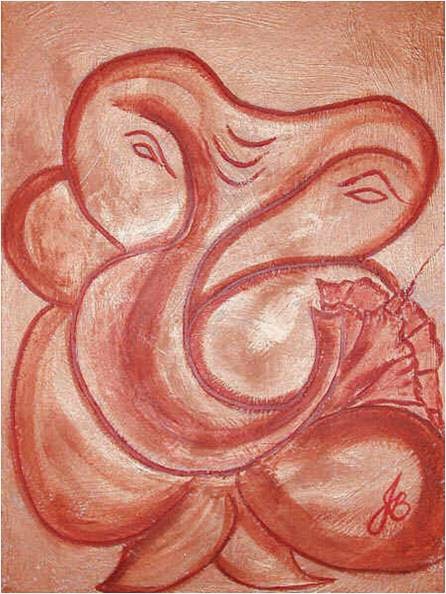 An intriguing aspect of Ganesha's iconography is his broken tusk, leading to the appellation Ekdanta, Ek meaning one and danta meaning teeth. It carries an interesting legend behind it: When Parashurama one of Shiva's favorite disciples, came to visit him, he found Ganesha guarding Shiva's inner apartments. His father being asleep, Ganesha opposed Parshurama's entry. Parashurama nevertheless tried to urge his way, and the parties came to blows. Ganesha had at first the advantage, seizing Parashurama in his trunk, and giving him a twirl that left him sick and senseless; on recovering, Parashurama threw his axe at Ganesha, who recognizing it as his father's weapon (Shiva having given it to Parashurama) received it with all humility upon one of his tusks, which it immediately severed, and hence Ganesha has but one tusk.


A different legend narrates that Ganesha was asked to scribe down the epic of Mahabharata, dictated to him by its author, sage Vyasa. Taking into note the enormity and significance of the task, Ganesha realized the inadequacy of any ordinary 'pen' to undertake the task. He thus broke one of his own tusks and made a pen out of it. The lesson offered here is that no sacrifice is big enough in the pursuit of knowledge.


There seems to be a pattern in the creation of this Lord and the iconography relating to him. Note the contradictions in his very being. He is The Lord of ganas but has a body not all Human. He is the God of knowledge and is even invoked for any great work of art and yet when it comes to warfare he seems to be victorious there too. In each of his eight incarnations he was fighting a major demon be it a demon of anger, jealousy or greed. You would not normally associate the heroism of warfare to a childlike, food happy diety. Yet his very being is out of duality. He is born out of Shiva and Shakti. He is born out of the basis of male and female symbols of Hindisum. Yet at a deeper meaning what is Shiva and Shakti. Why are they seen in union for the protection of the universe. They are just the principles addressing the various tatva’s in the human being. To quote, Dr. Devdutt Pattanaik  “When the mind behaves like Shiva, the hermit, and shuns all things worldly; the world around behaves like Kali and Gauri, demanding attention. When the mind behaves like Vishnu, the householder; the world around becomes like Lakshmi, Sita and Radha and Rukmini and Satyabhama, a source of joy as well as a responsibility to bear. Unfortunately, most of the time, the mind behaves like Brahma – seeking control and dominion over the world around. So the Goddess turns into Shatarupa, the nymph, who cannot be captured. Brahma tries to catch her but fails. When he stops and sits and pays attention carefully, Shatarupa transforms into Saraswati, goddess of wisdom, and enables his transformation into Shiva or Vishnu.”


Yet coming back to iconography within Ganesha one finds a polarity even in his names. The names Vighnesha and Vighneshvara  refers to his primary function in Hindu theology as the master of obstacles (vighna), and he is the remover as well.


His Vahana although primarily has been the mouse in some avataar’s like Vikata, and the Vighnaraja he uses a peacock and a snake respectively. The mouse  becomes the embodiment of the intellect. It is able to slip unobserved or without our knowledge into places which we would have not thought it possible to penetrate. In doing this it is hardly concerned whether it is seeking virtue or vice. The mouse thus represents our wandering, wayward mind, lured to undesirable or corrupting grounds. By showing the mouse paying subservience to Lord Ganesha it is implied that the intellect has been tamed through Ganesha's power of discrimination. At a recent temple visit I overheard a Chinese guide explain to the tourists that the mouse was also a symbol of the “ego”. The Lord Ganesha, the huge elephant tusked God rides on a small mouse. This is to signify how he keeps his foot over the ego and has complete control over it. For me this seemed a logical explanation given the importance associated with this first child of Shiva and Shakti. 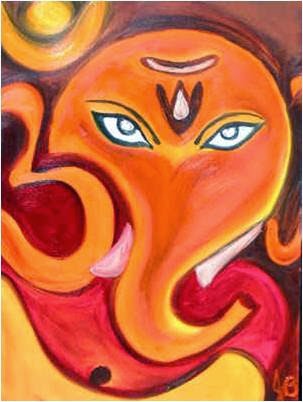 According to Kundalini yoga, Ganesha resides in the first chakra, called Muladhara (mūlādhāra). Mula means "original, main"; adhara means "base, foundation". The muladhara chakra is the principle on which the manifestation or outward expansion of primordial Divine Force rests. This association is also attested to in the Ganapati Atharvashirsa. Ganesha holds, supports and guides all other chakras, thereby "governing the forces that propel the wheel of life". Personally I have extended the travelling of the consciousness from the muladhara to the top chakra, Sahasrara, in the form of a conch shell headed Lord with the AUM as the ear to the universal happenings.


Any exploration of Lord Ganesha cannot be concluded without a mention of the mystical syllable AUM. The sacred AUM is the most powerful Universal symbol of the divine presence in Hindu thought. It is said to be the first cosmic sound with which creation came into being. Artists have often taken liberty with this manifestation to give it their own touch of obeisance.  I have done it before and I am about to do it again in my forth coming exhibition.


Ganesha is thus the ONLY god to be associated in a "physical" sense with the primordial sacred sound AUM, a telling reminder of his supreme position in the Hindu pantheon. The number “3” has also symbolically represents “AUM”. The symbol of Aum consists of three curves standing for the three states of consciousness. The sound Aum also has three sounds together. The Mandukya Upanishad explains this in great detail. Hence “Omkara”, the one whose body denotes the shape of AUM is the embodiment of the supreme consciousness.


Recently I was curated for “The Global Icon: Ganesha in Fine Art” by Vidhya Gnana Couresan, for the exhibition. I was returning to this deity after a good few years of interval. I started rethinking my older work and I have hence come up with a series of four paintings of which three are bound within heavy symbolism. Over here you will find the Cubic Vinayaka, where I have taken the liberties to interpret the Lord and Cubism to my personal understanding. I have used a lot of Picasso’s palette   for expression as well. Yet my figure remains inspired by Hussain once again. The moon I choose to give a twist with the yin yang, bringing the female and male principle, within the canvas as to me Ganesha is the result of this unison. 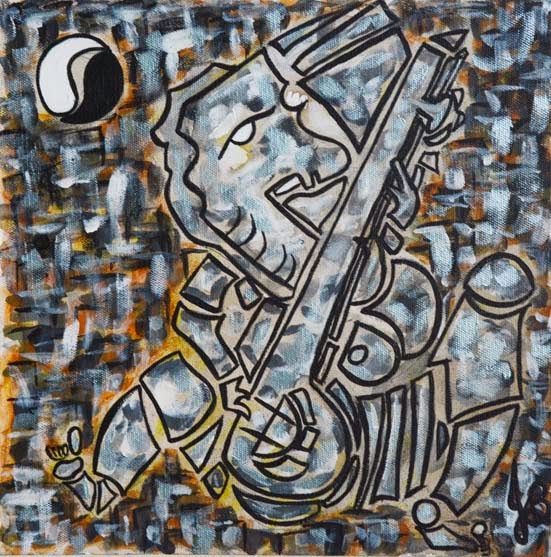