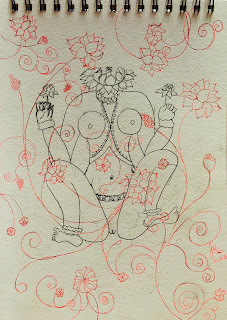 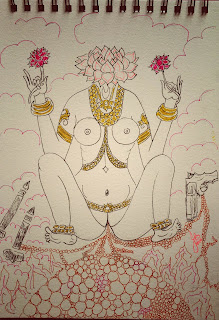 I chanced upon her accidentally during a Google search. She seemed to draw me in to her immediately. It was that Lotus head with that exposed vulva Posture that had me intrigued. I had to draw her, and draw I did. The first sketch, on the form that the first sculptures of her were found, in old civilizations, life giving, flowering, in a blossoming phase. However I was looking for a birthing goddess and I stumbled upon her as I wanted to articulate the current state of earth and humanity. My second sketch is what she seemed to just be right for. However due to the extraordinary combination of her posture with her lotus head I started reading more about the Lajja Gauri. The name itself had me intrigued and I did feel the name was a result of societies much after the concept of this diety.
Her visually explicit representation is aesthetic and pertaining to her cult birthing and not pornographic at all, contrary to the Victorian socially constituted societies.  Her first reference is the Rig Veda, while her worship can be traced back to the 1st century in the Indus Valley and is linked to Shaktism cults, she has the appellation of the Goddess Aditi. Her description in the Rig Veda describes her limitless and being uninhibited is her true form, free as the sky, open and vast. Gauri in southern India is linked to Sati and Parvati, hence she is very much linked to the Shaktism beliefs. Gauri is the manifestation of the supreme Mother, limitless like the sky in her description, and is invoked more for her role in fertility and progeny. She is the life giving or birthing force. She is referred to as the Creator Deity who has given birth to the trinity. Other similar references of Lajja Gauri are in Renuka Goddess of fertility, similar to Matangi and the grama devata Yallama.
Now to analyse her detailed postural references to variant beliefs and practices in the East. Her “Uttanapad” posture which is the legs wide apart, is to facilitate childbirth via full exposure. One leg raised slightly higher than the other. Her sensually comfortable posture also has lotus adoration through ornamentation. The lotus symbol follows as a vine through her body almost rising from her base chakra as a seed and through her ornaments onto the lotus she holds in both hands and then sees a complete manifestation a full blossomed many fold Lotus as her head symbol.
To now understand the emphasis on Lotus as the most important symbol that She carries. The Lotus has great significance in all ancient civilizations, from the Hindu traditions to the Egyptian beliefs. According to the Egyptian myth of world creation, the lotus came from an original silt and from its chalice the divine Creator. The lotus flower, opening up at sunrise and closing at sunset, symbolizes the Sun God and the light expansion outside the original silt. This interesting as the slit here can be referred to the Goddesses vulva travelling upwards to create the divine chalice in which, births and blossoms true spiritual knowledge. The Lotus is the symbol of true spiritual blossoming. In the Tantra beliefs, there is a subtle body within the human body, crossed by three channels known as the nadis at the base. The Lateral channels where opposed energies, solar and lunar, are winding around the third neuter channel and five basic points. The total seven points referred to as chakras translating to wheels in Sanskrit, coming with spikes form the lotus in stylized form. These centres are represented very precisely in the Hindu tradition as lotuses with the petal number.
In my bid to understand the Mother Divine in this form, the Tantra explanation of ascension, seems to best express her. The “kundalini” rises in the static form of the subtle energy, crosses successively the different chakras associated with the physical, psychical and spiritual needs to lead the being towards the true Knowledge and the full Realization symbolized by the thousand petal lotus. In the Taoist Tantra, the blooming is the result of an internal alchemy, marriage of the essence (hsin) with the breath (ki), of Fire (Li) and Water (Kan) that symbolizes the return to the centre, the unity of the essential state represented by the lotus.

To sum it up I understand the Lajja Gauri not just as a Goddess of fertility but a Goddess that represents Life. She is life giving by nature. With an open vulva the seed of thought germinates within her, and takes full form in her chalice. Life and thought both move upwards experiencing the body pains and pleasures to transcend above these for the ultimate birth goal, which is the spiritual manifestation of a being. This is best represented in the manifold Lotus head, where the body ceases to exist and only the pleasure of a fully realised existence persists in the Padma formation. I hence would like to name her in my drawings as the “Padma Gauri”. In my second drawing My Padma, is releasing the toxic state of being that our planet has evolved into. This drawing is a question to our existing humanity and societies, as to where we are headed, with our mindless growth and violence. Is there any realization happening or are we on the path of self annihilation……in that case her vulva will now consume existence. The lotus of learning will not shrivel but stand true for ages to come, advising, that we need to rise above the physical state of being of war and meaningless misery.

Beautiful expression with words but your expression with arts makes it more beautiful as its gives you more detail understanding where words may confuse a novice in the path..just aho